The Floating Bible: Miracle of the Risen Word 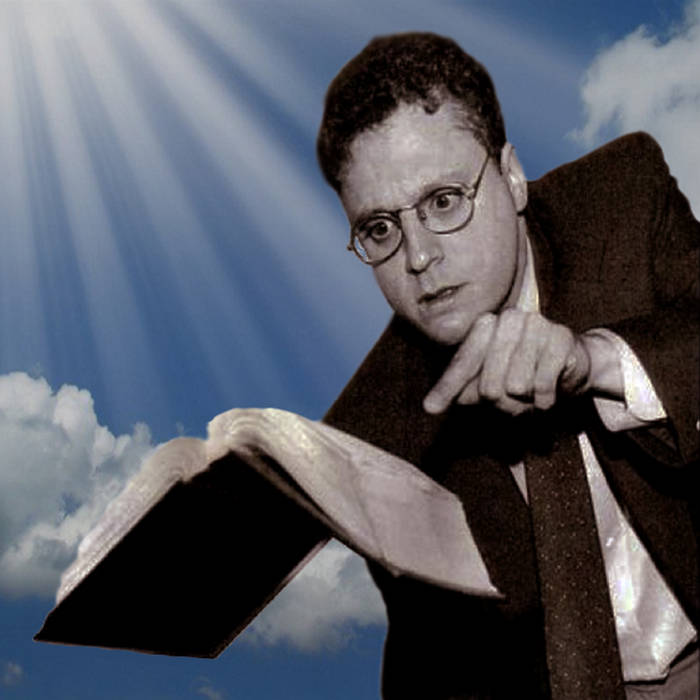 The composition is based upon an article by Michael Andrew entitled ‘Amazing Bible Floats in Midair’ published in the American tabloid ‘Weekly World News’ on 9 January 1996. It describes a bible that a maid discovered floating four feet above a bed in a motel on the outskirts of Sacramento, California. Religious experts spoke of the mysterious phenomenon as ‘the miracle of the risen word’. Dr Henry Wanz, a physicist, along with a scientific team were brought in to investigate the phenomenon. But after ‘a battery of tests’ and efforts to establish whether there was evidence of chicanery, they concluded that there was no explanation for the suspension of the laws of gravity.

For Frank Glergins, a 50-year old ex-Marine and the motel’s owner, the sight of the floating bible changed his life forever. The night before the discovery, a kindly-looking man with a beard checked into the motel and began a discussion about religion with him. Glergins confessed that he didn’t believe in God, but the man assured him that ‘You will believe tomorrow’. The bible was open at the page where it is written ‘but with God all things are possible’ (Matthew 19.26). The motel owner believed that the message was intended both for him and the world: God could overcome every problem, no matter how difficult. The local clergy petitioned the Vatican to declare it a miracle, but to no avail, while churchman in the area urged the public not to believe that the bearded man (who could never be located) was ‘the reincarnation of Jesus Christ’.

During its twenty-eight year run, the ‘Weekly World News’ published largely fictional stories as ‘truth’, including numerous articles about mutants, supernatural creatures, aliens, sightings of Elvis alive, and Big Foot. In this respect, the paper was a major contributor to the dissemination and origination of urban mythologies. More often than not, the settings associated with the encounters were vague, witnesses and experts were untraceable, and the stories, inauthenticable.

The story of the floating bible conflates several established narratives of religious miracles. In the Roman Catholic tradition there are many claims to visions of the Host (or sacramental wafer), as well as crosses and crucifixes hovering in the air unsupported. The bible, too, contains its own contribution to the suspension genre in the story of an axe head that floated upon the water (2 Kings 6.1-7). In defying the laws of nature, such miracles were the ideal proof of Christianity's authenticity. They were acts that God alone could perform, and clearly visible to many people at once.

For the purposes of the composition, the factuality or otherwise of the phenomenon is irrelevant. The story is a visually striking encapsulation of the conflict between science and religion, the miraculous and the empirical. I challenged myself to represent the image sonically and to literally float a bible but with the aid of science and technology rather than divine intervention. In the mundane world, the bible does float free from physical support when it is read aloud. The words are unanchored from the printed page and become audible vibrations or sound waves. In radio broadcasting, these sound waves are, by means of a microphone, converted into an electrical signal, encoded as modulated electromagnetic waves, and transmitted from a radio antenna. The waves are, in turn, received by another radio antenna, a tuner, an amplifier, and finally a demodulator that extracts the sound wave from the original signal so that it can once again float upon the air.

The composition’s source material is a reading taken from the Authorized Version of the bible that was broadcast by an American fundamentalist radio station. The same translation is used in Gideons bibles - brown cover, octavo versions of which are deposited by the organization in many motels rooms in the USA. The text for the composition is based upon the verso and recto (pages 1014 and 1015) of an edition of the Gideons bible that would have been available at the time of the incident. The text ‘with God all things are possible’ is printed on the recto. The reading begins, at the top of the verso with the second part of Matthew chapter 19 and verse 3: ‘him, Is it lawful for a man …’. It ends at the bottom of the verso, at Matthew chapter 20 and verse 25: ‘ … and they that are great exercise authority upon them.’

The visible text consists of 1,285 words. A recording is made of each word. The scripture is then suspended temporally, rather that spatially (as it was in the motel room). The duration of each word’s sound is stretched to 7 minutes and 22 seconds (the time it took the radio broadcaster to read the entire text). All the words of each verse are heard at the same time. On this album, the verses printed on the recto page then, the verso page, and finally both pages can be heard altogether at the close of the suite.

The cover artwork for the individual verses (which can be seen by clicking on the track title) is a visual response to the sonic suite. Here, each word on the open pages is written out by hand (the equivalent of speaking the text), scanned, digitally stretched, word by word, to the column height of the text in the Gideon bible, and arranged within the outline of the whole page format in either a verso or recto orientation.

The sound articulations of the verses were developed incrementally between the period from April to October 2014.

This sound artefact is part of ‘The Aural Bible II: The Bible in Translation' project, which was developed in conjunction with the National Screen & Sound Archive of Wales (www.archif.com). 'The Aural Bible' series aims, first, to deal with the Scriptures not as the written or printed word but as a spoken and heard word; and secondly, to explore Protestantism’s emphasis on aurality (through speech and song).

This project was made possible with funding from the Arts Council of Wales (www.artswales.org.uk).

Harvey is a historian of art, visual culture, and sound art, and also a sound- and visual-art practitioner. His research field is the visual and sonic culture of religion, principally. He explores non-iconic attitudes to visualization and sonic articulations of religion by engaging visual, textual, and audible sources, theological and cultural ideas, and systemic and audiovisualogical processes. ... more

Bandcamp Daily  your guide to the world of Bandcamp

cktrl talks about heartbreak and his new record 'Robyn'